The human body has not evolved at the same pace as the human mind.  We still have the same (brilliant and functional!) body design that we have had for thousands of years.  We are still the same homosapeins – except…we live in cages.  We work in cages.  We drive around in little cages on wheels.  We outsource our survival needs.  We limit our movement nutrients so that our bodies crave movement binges to keep us, well, moving.  Our bodies have, over time, conformed to the environment in which we exist, but our basic needs have not changed.  Our DNA memory (that developed in the out-of-doors) still requires us to get what we need from being outside.  Looking to the way humans evolved – and not to what humans looked like a mere one hundred years ago – gives us clues about how we can be healthier.

Most of us know what happens to wild animals in zoos and that since the dawn of zoos, public demand for more “humane” treatment has led to changes in the way zoos are run.  For example, animals in small concrete cages are actually depressed and sad to look at, so people want natural-looking habitat of a decent size.  Outcry over removing animals from the wild sheerly for the purpose of placing them in confinement has lead to zoos that are more full of animals raised in captivity or rehabilitation.  The more challenging it is to keep an animal alive in captivity, the fewer there are in zoos.  Think of great white sharks which are so challenging to keep alive that they are released with location devices so that they are studied mostly in the wild and we know relatively little about them.  Think of elephants, which are so intelligent and have such complex routines of migration and family dynamics that they are often treated with anti-depressants in zoos, where their habitat is so removed from their wild needs.

Today more than ever, humans are demonstrating a plethora of problems with confinement.  Depending on a big-picture family history, as well as where our ancestors lived (ie, how long indoors in a developed nation as opposed to one where people have fewer resources for outsourcing their survival and spend more time outdoors), humans demonstrate different levels of adjustment or dysfunction in their not-wild habitat.

This quote from the Ancient History Encyclopedia is helpful to remind us of life before confinement: “Straight off the bat, it is important to realise that the variety between hunter-gatherer societies throughout time was so high that no single, all-compassing set of characteristics  can be attributed to them.”  Variety.  There was more variety in everything.  Where other generalizations may be almost impossible to find, we know that the ancient lives of humans included a tremendous amount of variety in food AND in the outside influencing factors of our environment to which their bodies conformed, giving us much more access to dynamic functional living.  The more variety we can give ourselves on the inside of our bodies and what influences us on the outside, the better off we will be.

Now we have brains that understand so much, as well as a body of studied history that we can learn from.  We can make choices based on this knowledge to get ourselves out of our confinement predicament!

My mentor and teacher, Katy Bowman, MS writes a lot about this very concept; in fact, she has built her entire business on it.  She likens movements to vitamins because they ARE the vitamins that our bodies need to function as an organic physical unit.  Check out her books for more information and ideas about how to get out of your cages. 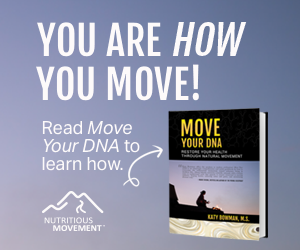 Some links in our Shop and in certain Blog Posts are to products used at home or in the studio by Kelly Reed Daulton. Students frequently request information about these products or desire to purchase their own. We do not sell the products but bear in mind that they are affiliate links and if you go through them to make a purchase Kelly will earn a small commission. Keep in mind that she links these companies and their products because of their quality and her personal experience with them, and not because of the commission received from your purchases. The decision is yours, and whether or not you decide to buy something is completely up to you.

Get all the latest News!
Subscribe to our Newsletter!

To ensure delivery of your Newsletter, please add Kelly@KellyReedDaulton.com to your address book.

This signup comes to us as an inquiry on training the feet so we can contact you and set up sessions. To ensure delivery of your Healthy Feet Earthing Club emails, please add Kelly@KellyReedDaulton.com to your address book.

Free PDF: How to be Comfortable and Rejuvenate by Sleeping on the Ground